“Star Wars – The rise of Skywalker?” 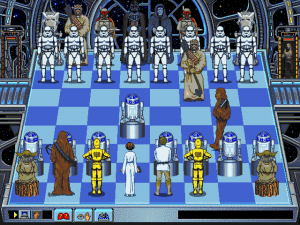 In the latest episode of the long running saga the forces of the resistance travelled deep into the heart of the Empire (Stafford).

The team was led on board 1 by Obi-Julian Kenobi, with Yoda vid Price on 2, Hans Simon Solo on 3 and Lukasz Skywalker playing for the dark side on 4.

Before the match, as is customary C3P0 & R2D2 were switched off, and battle commenced with Storm Troopers deployed.

Boards 1 – 3 all appeared tight with tactical positioning going on but on board 4 the force was strong with young Skywalker and he was soon a knight and a pawn up. However, his King was alone in the centre of the universe with the Empire’s forces all around him. With his trusty light sabre in hand he stood firm, used the force and gradually smote all that surrounded him. A very pleasing 1-0 start and Skywalker retired to the feast of the Gods; pizza and chips!!!! 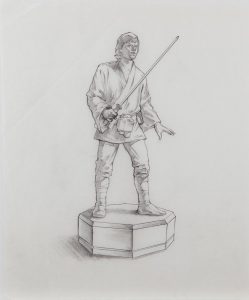 He was soon joined by Hans Simon Solo (otherwise known as chip-eater) who had converted a promising, but complicated pressure building attack into a crushing victory and the Resistance were 2 up and those chips weren’t going to last long! 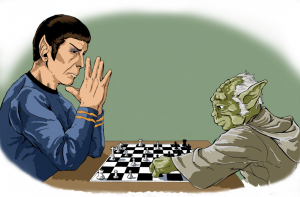 After another 30 minutes of pawn pushing and dalliances Yoda and Obi-Julian both agreed draws with their respective opponents and off to the bar for food and drink, and a fair degree of satisfaction for a job very well done; 3 – 1.

It is evident that the force is getting stronger with young Skywalker and the four Jedi warriors return for their final battle where the season began; in a galaxy, far, far away.

(The Mals club; Wednesday the 8th May;

One thought on “Division 5 – Stafford B vs Crewe E”