Back in April Chester hosted a Rapid-play Congress to celebrate their 100th anniversary as a chess club. Our club provided 7 or 8 of the 100 entries and tied for a bone-fide team prize with Chester’s top team (grades 217, 190, 175) while our team was much lower graded. It was agreed rather than split the clock in two the clubs would arrange some sort of challenge and we settled on a 2-round RP match being played at Chester’s Town Crier venue over 12 boards per team played last night. 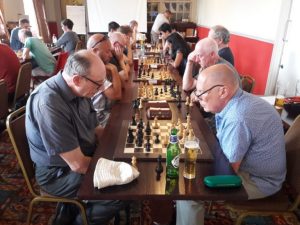 The first round of games started with an early blast of results with 4 boards being shared. As your reporter knuckled down to play his game he was last to finish in the round and was pleasantly shocked to find Crewe had outplayed the much higher graded players from Chester to lead 9-3 ! It must be said that although there was a 160 point grade advantage over the 12 boards to Chester, they had not accounted for our much greater experience of Rapid-play conditions. 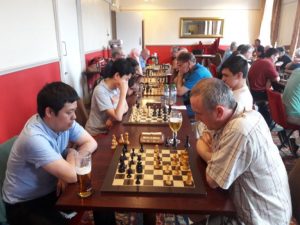 According to Chester’s president the match was decided early in the 2nd round as Crewe picked up 3.5 pts from the first 4 games to guarantee success. In cricketing terms he says “it was close to losing by an innings”. The remaining games saw Chester fight their way back and they managed to win the 2nd round narrowly by 6.5-5.5. Overall Crewe won convincingly by 14.5 – 9.5 and await the clock-prize which has recently been ordered with some new equipment at Chester.

There were a number of outstanding performances from our members scoring 2 pts with George Jelliss, Nigel Gardner and Kobus Nienaber deserving special mention as they outplayed their higher grade opponents. 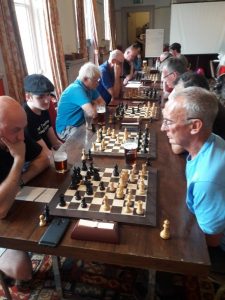